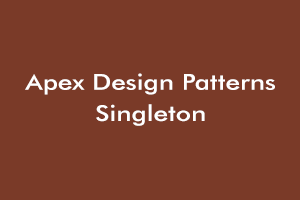 While implementing any code, sometimes we need to create an object of a class but we want to initiate it only once means we initiate an object once for the lifetime of its execution context.

Why do we need the singleton pattern?

Problem
Sometimes a developer writes code that needs to initiate an object of a class again and again in a loop. It will result in inefficient, low-performing code, as well as the potential for governor limitations to be exceeded.

Solution
To resolve this problem we need to implement the Singleton pattern in Apex, the class must instantiate only a single instance and be globally accessible. It is implemented by: