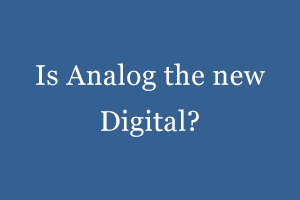 Is Analog the new Digital?

The world of so many Digi-tech wizards around us has made the world so convenient for us. Whether someone is using it in one way or another but we can’t just deny its presence revolving in its phases in one or the other dimensions. Imagine the era when we had manpower involved in everything where everything was a deal of heavy effort and big-time investment.

But with the growing investment of the world in making it a Digital one, we have been able to minimize the effort and time involved in the traditional practices of getting our jobs done.
The idea is, we never count the presence of something until we find that it is in danger, what we thought the digital world to be is a quick and a go-fro activity.

Also, if you see more than 70% of the devices are working or are in the next plan of working with the collaborations of Fuzzy Networkings, Artificial Intelligence, Cloud and Neural Computing, which is a tremendous profile to have with what we expect from a technology that is so to say QUICK and go-fro.

Out of all the facilities we have been provided within the new world, we have outlined the certain factor of Security. We have examples with us stating the reliability of Digital media, transactions, the Dark-web, and a lot more wavy paraphernalia stating that this all can be siphoned with just a smart mind and a click. So is security so meaningless for us after effortlessness?

Like pictures, sound signs can have a restricted bandwidth whenever recorded digitally. When a digital medium is met, the bandwidth is set up whereas an analog medium is viewed as limitless. Subsequently, it can move to an ever more elevated resolution without losing its unique quality. Just an N-Factor, the medium of the channel is expensive.

Imagine the phase when dealing with the world digitally was in its early times, though hacking was a factor at that time as well that was due to lack of knowledge otherwise it was much secure and tech-wavy than we have today, that is because we have a nexus of Analog and Digital with us, the same way we need a world with a nexus of Analog technology at the local level of data management and a Digital technology for managing the data and that local level of data. Which will be way more secure, way faster, and way more reliable to meet our future needs of Data processing.