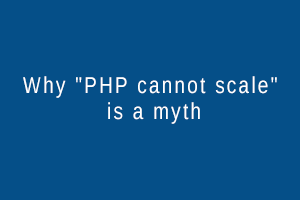 Why “PHP cannot scale” is a myth?

While some may argue that PHP is dead, it’s far from the truth. As per W3Techs, PHP is used by 79% of all websites whose server-side programming language they know. That’s almost 4 out of 5 websites! So, it is much alive, faster, and better than it has ever been.

Yes, at an isolated level it is slower than C#, Java, and C/C++ but the truth is in the actual systems it won’t matter that much. You can build large-scale systems on its frameworks. In fact, 4 of the top 20 visited Websites are powered by PHP (Facebook, Yahoo, Wikipedia, Flickr to name a few). PHP with an opcode cache (eg APC) can take you much further than you’ll probably need or care about.