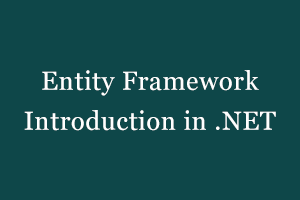 Entity Framework is described as an ORM (Object Relational Mapping) framework that provides an automatic mechanism for developers to store and access the information from the database.

It is the primary source of interaction between .NET applications and relational databases. Entity Framework consists of a variety of tools that simplify mapping between objects in your software to the tables and columns of a computer database. ORM automatically creates classes supported database tables or vice-versa i.e. it can even automatically generate necessary SQL to form database tables supported classes.

Use of Entity Framework

The architecture of Framework consists of the following:

The Entity Data Model (EDM) specifies (CSDL) the conceptual model and an extended version entity-relationship model. It also refers to a collection of concepts that describe the data structure of the system, no matter its stored form.
The model uses three core parts of EDM.

The Entity Framework entitles you to insert, question, delete, and update data, using Common Language Runtime (CLR) objects that can be referred to as entities. The Entity Framework maps the entities and relationships that are defined in your model to a database. It also provides resources to

The primary class that is liable for interacting with data as objects is System.Data.Entity.DbContext.

There are three varieties of queries –

In Entity Framework, there are two types of entities in entity framework: POCO entities and Dynamic Proxy
POCO Entities:

To support the lazy loading of the defined related objects & also to trace the changes in POCO classes, then