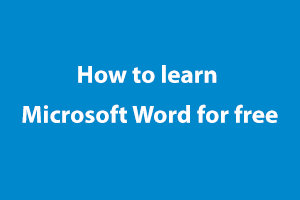 How to learn Microsoft Word for free?

We have various text editing applications available on the internet today. We can read, write, add pictures, and do many other things on these text editors. We might use a notepad or a similar and simple text editor for noting things down but when it comes to preparing formal documents, we only have a few text editors that have the ability to do so. Microsoft Word is one of the most used text editing software. It comes in the Microsoft Office suite or it can be downloaded as a standalone application. Microsoft Office is a paid set of software that is created and owned by Microsoft. It offers multiple applications like Microsoft PowerPoint, Microsoft Excel, Microsoft Word, etc.

The creation of Microsoft started back in the 1980s. It was first released for Xenix systems on 25th October 1983 and was named Multi-Tool Word. Soon as it gained refinement and popularity, versions were released for operating systems like Mac OS and Microsoft Windows. After these versions, it gained even more popularity as it was now available on more than one platform. A lot of new features were added to Microsoft Word. Later on, Microsoft started offering as a default application in Microsoft Windows. But a more refined version was available in the Microsoft Office Suite.

Microsoft is quite easy to learn nowadays due to its simple yet useful UI. You can always watch some videos on Youtube to have in-depth knowledge about Microsoft Word. But we will discuss some of the basic functions in Microsoft Word.

The UI is divided into 2 main parts. The upper part consists of the basic features that can be used while working on a document and the lower part is the writing area where all the text appears.

In the upper part also known as the toolbar is divided into multiple menus. The most used menus are Home, Insert, Page Layout, References, Review, and View.

The home menu consists of basic tools like style, size, and format of the text. Insert Menu is used to insert word art, pictures, and other media to the document. Page Layout is used to prepare a document for printing a physical copy of the document. Reference Menu tab is used to enter references to the text in the document. The review tab is used mainly for spelling and grammar check.
To learn more about Microsoft Word for free you can visit these sites: