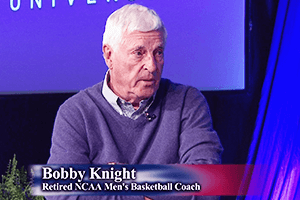 WHO IS BOBBY KNIGHT?

Bobby Knight whose original name is Robert Montgomery Knight (born October 25, 1940) is a former American basketball coach. Knight won 902 NCAA Division I men’s college basketball games which were a record at the time of his retirement. Bobby Knight was best known as the head coach of the Indiana Hoosiers from 1971 to 2000. He also coached at Texas Tech from 2001 to 2008 and at Army from 1965 to 1971.

Knight was one of basketball’s most successful coaches in College. Knight always faced controversy with his outspoken nature and demonstrative behavior. He once famously threw a chair across the court during a game. Knight was once arrested in Puerto Rico because of a physical confrontation with a police officer. Knight regularly displayed a short temper nature and was sometimes accused of verbal conflicts with members of the press. He was also captured on videotape appearing to have possibly grabbed one of his players by the neck. Knight once choked a player during practice. A “zero tolerance” policy was instituted for coach Knight because of that accident.

In 2008, Knight joined ESPN (Entertainment and Sports Programming Network) as a men’s college basketball studio analyst during Championship Week and for coverage of the NCAA Tournament. He continued covering college basketball for ESPN during the 2014–15 season.

Bobby Knight returned to the home court of the school that fired him 20 years ago. He was present there to celebrate the 40th anniversary of Indiana University’s 1980 Big Ten championship team, which was coached by Knight.