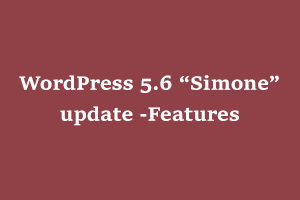 WordPress 5.6 Simone is one of the latest versions of WordPress. The name Simone is dedicated to the remarkable American musician and activist Nina Simone. It was released on December 8, 2020. It comes with a lot of updates like brand new canvas built-in themes, many improvements, and more flexibility for customization and integrations.

WordPress 5.6 Simone release is a big and special one because it marks the first release squad led entirely by women in WordPress history. More than 605 developers contribute to the WordPress 5.6 version. This new version supports PHP 8. Developers have taken the great decision to launch WordPress 5.6 after the launch of PHP 8.

Here are some features of WordPress 5.6: