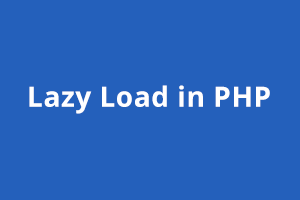 According to the definition, Lazy Load is a design pattern commonly utilized in programming and mostly in web design and development to defer the initialization of an object until the time at which it’s needed.

In simple words, we can say that we do not load the entire web page and render it to the user in one go as in bulk loading, Instead of loading only the specified section and delaying the remaining, until it’s needed by the user.

For example, say a user requests for the logo of a Particular Website from a search engine. The entire web page, shown with the requested content, is loaded. Now if the user opens the primary image and is satisfied with it, he will probably close the online page thus, the remainder of the pictures which have been loaded will be left unseen. This will end within the wastage of the resources so consumed within the majority load of that page. Thus the answer to the present is Lazy Loading.

A simple example of lazy loading is infinity scroll, in which the content of the web page is loaded when the user scrolls down the page. It is a well-liked technique getting used by various websites.

When a resource initializes, lazy loading delays its process where eager loading loads the data as early as it can.
Eager loading also includes pre-loading of the related data referenced by a resource. Let us consider an easy PHP code during which we use and include a statement to perform eager loading—When It executes, it will load the included resources.
Eager loading is useful when there’s a chance to load resources within the background. Like some Mobile or we can say Web Applications display a “Loading” screen and eagerly load all the resources required for the Application to run.

The extra lines of code, to be added to the previous code, for the implementation of lazy loading makes the code somehow complicated.
Lazy loading affects the website’s ranking on search engines sometimes, because of improper indexing of the uploaded content as all the data are not Loaded at the time of Website Open.

Conclusion:
There is a major advantage of lazy loading for optimal utilization of time and space.