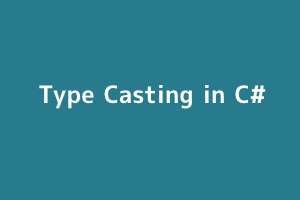 Suppose we have a variable whose type is an integer and we need to pass it to a method parameter whose type is double. Such operations are called Type Conversion.

We have different types of conversions in C# i.e.,

Here in the example the variable d which is of long data type is converted to an integer and is rounded off to the closest figure.