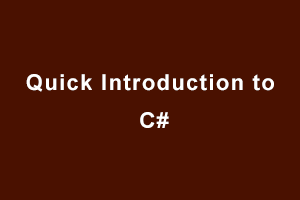 Categories of variables in C# are described into the following types −

Method Overloading is a type of polymorphism. It is also called “Static Polymorphism” or “Compile Time Polymorphism”. You can not define more than one method with the same name and the type of the arguments. It would be a compiler error.
Method overloading can be done by changing:

Interfaces will contain only the declaration of the members. The implementation of interface members will be given by the class who implements the interface implicitly or explicitly.

Looping in a programming language is a way to execute a statement or a set of statements multiple times depending on the result of the condition to be evaluated to execute statements.

C# has the following conditional statements:

It is a mechanism by which one class is allowed to inherit the features(fields and methods) of another class.

In c# There is no keyword like “final” but the same thing is achieved by the keyword “sealed“.
A sealed class cannot be inherited.

Static is a modifier in C# which can be used with the following:

Being the most extensively used JavaScript library, a jQuery Certification will add enormous value to your skill-set. jQuery provides various functionalities to the developer in order to develop complex applications with ease and efficiency.