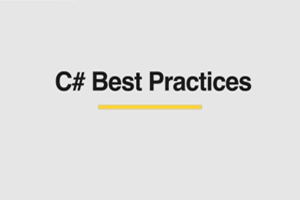 Good code is self-explanatory, readable, optimized, and easy to maintain. Your piece of code should be readable enough and easy to understand like a story. Naming conventions play a major role in this.

There are following three terminologies are used to declare C# naming standards.

In the below C# code, we are passing the variable “i” as value type and in the method, incrementing it by 10. As it was passed by value, you will see the original value “5” as the output of the program code.

Hence, decide before you start the implementation, else once implemented it will be very difficult to change them over your huge application.
Always Use Properties instead of Public Variables
public class Person
{
public string Name { get; private set; }
public string Age { get; }
}

If you don’t want anybody to set the Property explicitly from outside, you can just only implement the getter inside the property implementation or mark the setter as private. Also, you can implement the properties from any interface, thus giving you more OOPs.
Use Nullable Data Types Whenever Required
int index = 0; // simple declaration of int
To convert this as a nullable data type, you have to modify a bit to declare like this:

int? index = null; // nullable data type declaration
Once you add the “?” modifier to the data type, your variable will become nullable and you will be able to store “null” value to it. Generally, it is helpful when used with boolean values.

foreach(var collectionValue in MyCollection)
{
// your code
}
Here, if your MyCollection is an Array type, the C# compiler will generate the following code for you:

for(int index = 0; index < MyCollection.Length; index++) { // your code } Properly Utilize try/catch/finally Blocks
Yes, properly utilize the try/catch/finally blocks. If you know that the C# code you wrote may throw some Exception, use the try/catch block for that piece of code to handle the exception. If you know that, the fifth line of your 10 lines code may throw an exception, it is advisable to wrap that line of code only with the try/catch block. Unnecessary lines of code with try/catch slow down your code processing. Sometimes, I notice people surrounding every method with try/catch blocks which is really very bad and decreases the performance of the code. So from now, use it only when it is required. For cleaning up of resources use the finally block after the call. If you are calling any database, close the connection in that block. Whether your code executes properly or not, the finally block always runs. So, properly utilize it to clean up the resources.

Catch Only that Exception that You Can Handle
It is also a major one. We always use the generic Exception class to catch any exception which is neither good for your application nor for the system performance. Use catch on those which are expected and order them accordingly. At the end of the code, add the generic Exception to catch any other unknown exceptions. This gives you a proper way to handle the exception. Suppose, your code is throwing NullReferenceException or ArgumentException.Direct use of the Exception class is very difficult to handle in your application. You can handle the problem easily, by catching the exception properly,

After the using() {} block, it will call the Dispose() method automatically to free up the class resources. You will not have to call the Dispose() explicitly for the class.
Splitting of Logic into Several Small and Simple Methods
If methods are too long, sometimes it is difficult to handle them. Always use a number of small methods based upon their functionality instead of putting them in a single one. If you break them in separate methods and in the future you need to call one part, it will be easier to call rather than replicating the code. Also, it is easier to do unit testing for the small chunks rather than a big C# code. So, whenever you are writing a piece of code, first think of what you want to do and extract your code in small simple methods and call them from wherever you want. In general, a method should not exceed 10-15 lines long.