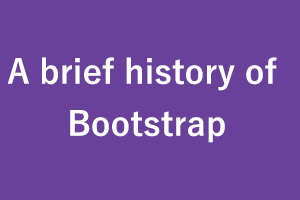 A brief history of Bootstrap

Bootstrap was created at Twitter in mid-2010. This is developed by Mark Otto and Jacob Thornton at Twitter. It was released as an open-source product in August 2011 on GitHub. It is a free and open-source CSS framework directed at responsive, mobile-first front-end web development.

It is a combination of CSS and JavaScript-based design templates for:

In Jan 2012, Bootstrap 2 was released, which added built-in support for Glyphicons, and other new components, as well as changes to many of the existing components. This version supports responsive web layout, meaning the layout of web pages adjusts dynamically, taking into account the characteristics of the device used (whether desktop, tablet, or mobile phone).
The next version, Bootstrap 3, was released in Aug 2013. It updated components to use flat design and a mobile-first approach.

It is a framework to help you design websites faster and easily. Here’s what you need to know: