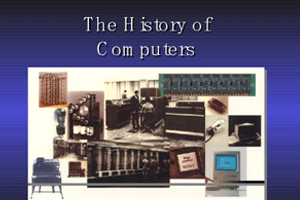 The word ‘computer’ was first used in the 16th century for a person who used to compute, mean do calculations. The word was used in a similar sense as a noun until the 20th century. Women were hired as human computers to hold out all sorts of calculations and computations

By the end of the 19th century, the word was also used to describe machines that did calculations. The modern-day use of the word is usually to explain programmable digital devices that run on electricity.

Since the evolution of humans, many devices have been used for calculations for thousands of years. One of the oldest and well-known devices was an abacus. Then in 1822, the father of computers, Charles Babbage started developing the first mechanical computer. In 1833 he actually designed an Analytical Engine which was a general-purpose computer. This computer contained an ALU, some basic flowchart principles, and also a concept of integrated memory.

More than a century later in the history of computers, we actually got our first electronic computer for general purposes. It was known as the ENIAC, which stands for Electronic Numerical Integrator and Computer. This computer was invented by John W. Mauchly and J. Presper Eckert.

With the time the technology developed and the computers got smaller and the processing got faster. The first laptop was developed in 1981 and it was introduced by Adam Osborne and EPSON.