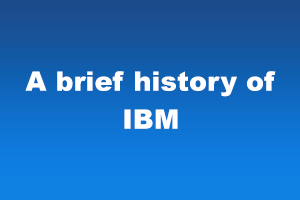 A brief history of IBM

The beginning of IBM –

IBM is one of the most popular computer companies in the world that was founded by Herman Hollerith and formed by the merger of three companies of the 1800s: the Computing Scale, the Tabulating Machine, and the Time Recording. The newly merged firm was based in New York City having around 1,300 employees. The company grew quickly and its name was changed to IBM in 1924 under the leadership of the general manager, Thomas Watson. IBM was the world leader in producing computer systems for both business and scientific applications. However, its primary focus was on standard office products. IBM became the leading American manufacturer of punch-card tabulating systems which was used by governments and private businesses with its highly disciplined and competitive sales force to develop custom-built tabulating systems according to the needs of customers.

In 1933, IBM purchased Electromatic Typewriters, Inc., and eventually became an industry leader in the field of electric typewriters. During World War II, IBM helped construct several high-speed electromechanical calculators that paved the way for electronic computers. In 1964, they revolutionized the industry by bringing out the first comprehensive family of computers (the System/360) which helped IBM to be in an even more dominant position by making its competitors to either merge with IBM or go bankrupt. 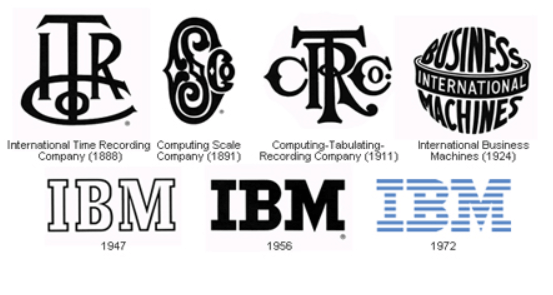 Its speciality was mainframe computers that were capable to process numerical data at greater speeds. In 1981, IBM Personal Computer was introduced which soon achieved a major share of the market, but IBM was unable to exercise its accustomed dominance as a producer of personal computers because of the emergence of new semiconductor-based technologies making manufacturing smaller computer easier, allowing other smaller competitors to exploit new developments such as workstations, computer networks, and computer graphics. As computing got smaller and faster, the company was not equipped to respond to an era in which mainframes were replaced by small servers, and thereby in the 1990s, the company downsized considerably. In 1995 IBM purchased Lotus Development Corporation, which was one of the major software manufacturers
The modern era of IBM began in 1981 with the Personal Computer 5150. This was one of the first computers intended for customer use rather than for business or the government. IBM partnered with Microsoft (MSFT) which was a relatively new company, to run MS-DOS as the operating system on these machines. In that same era, IBM invented the architecture for local area networks (LAN). This became the first network first in offices on which users could rely on and it laid the basis for the global networks that connect users on the internet. It developed the Deep Blue thinking system which was one of the modern benchmarks for artificial intelligence in the world. This AI became most famous for its series of chess games which defeated the world champion, Garry Kasparov, in 1997. It developed FORTRAN, the predecessor to the majority of modern computer programming languages. In 2002, IBM produced hard drives along with Hitachi in a joint venture, Hitachi Global Storage Technologies. Later, IBM sold its personal computer unit to Lenovo Group acquiring an 18.9% stake in it, which acquired the right to market its personal computers under the IBM label through 2010. With these divestitures, IBM shifted away from manufacturing commodity products in order to concentrate on its computer services including software, supercomputer, and other research divisions.

Modern IBM- IBM has placed one of its supercomputers consistently at the top of the list of most powerful machines. In addition to producing supercomputers for governments and large corporations, IBM, along with Toshiba and Sony, developed the Cell Broadband Engine over a four-year period that has multiple applications. IBM also designed the computer chips for the Microsoft Xbox 360 and the Nintendo game systems. IBM became the first company to generate more than 3,000 patents in 2001 and, later, more than 4,000 patents in the year 2008, adding its holdings to more than 40,000 active patents, which generates considerable income from royalties. IBM’s supercomputer research division continues to produce one of the most powerful and popular machines in the world and it continues to license new designs to businesses and governments. IBM, in collaboration with the U.S. Department of Energy, is working to launch a High-Performance Computing Consortium, which will help researchers everywhere better understand COVID-19, its treatments, and potential cures by providing an unmatched amount of computing power allowing them to run very large numbers of calculations in bioinformatics, epidemiology, and molecular modelling which would take even years to complete if worked by hand.