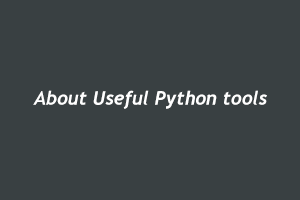 Among the developers, Python is one of the most popular languages in today’s world. There are numerous reasons behind the popularity of Python but primarily two reasons are easy syntax writing and an exclusive range of libraries, tools for data science, and scientific computing that Python offers to its users.
Today, we will discuss the most widely used Python tools by data scientists and developers across the world. If you know how to use them then these tools are very convenient for many different purposes. Let’s divide these tools into some categories that are mentioned below: