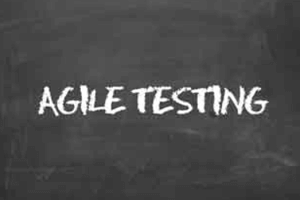 Most end users are not aware of how a software product or application passes through different stages before it comes into use in real-time. Among them, there is one stage i.e. testing stage where the product or application is tested for every sort of error or issue. Before launching them in the market it has become a common practice to perform testing or QA of every application and software to get rid of issues and errors.

There are many methodologies to test software and mobile applications. How we choose the testing technique entirely depends on the type of software to be tested and what are the expected end results. One of the most important testing techniques which are favorite among the testing services providers is Agile Testing.

What is Agile Testing?

To understand Agile Testing, first of all, we must be familiar with the idea of Agile Software Development. In the Agile development methodology, the primary concern is delivering a product with minimal functionalities to the client at the earliest. In this process of development with every delivery, more concerning features, dependable capabilities, and functionalities are added to the product. In the end, this method of development and delivering application leads to a higher level of customer satisfaction.

When a QA team performs tests using Agile methodology, testing is not done during one phase, but testing is done iteratively with every release. While adopting this testing approach, Agile testing involves a certain set of rules and principles, these are followed throughout the process. This approach should be adopted from the very starting stage of the development of the project and then it is taken forward with every development module. In this type of software testing, an incremental approach to testing is followed and the features are tested as they are developed. Hence this approach of testing often ensures minimal damage and risk in the end application.

In an agile team, it is the responsibility of each team member to focus on quality. However, It’s the best time to show your extra efforts and skills by sharing your expertise with the team members to build quality products in the development process. The Goal is no longer in finding bugs and defects, but there need to be efforts to prevent them from recurring again.
In a nutshell, the team should collaborate with customers to implement the agile practices and values to make good quality products.