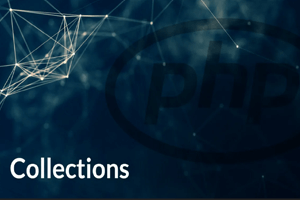 The base interface that covers functionality in the library which is common to all the data structures is defined as Collections. Collection class is a replacement for the traditional array data structure. Collections also contain member elements just like arrays but they are considered to be objects instead of simpler types of arrays and strings.

Some Characteristics of the collections class are:

Problems with an array:

Example of an array:

The above example has the following problems:

By creating a collection class These problems with arrays can be solved.

In the $users array we can store the objects.

addUser(): we can add new members to the collection or we can say new objects can be created with this method.

$key parameter can be used to define the specified location in which that particular object is stored and if null is passed to the $key then it will choose the next free location to add that object.
If we try to add an object by using a $key that is already in use then it will throw an exception to prevent overwriting of existing information.

deleteUser(): it removes the object
getUser(): retrieves the object.
By using the $key as a parameter we can specify the particular object that we want to delete or retrieve. But in case of invalid key or we can say if that key does not exist then an exception will be thrown.
Example: