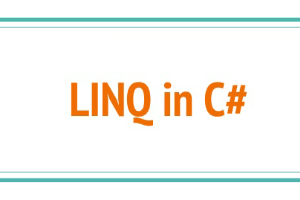 LINQ is an acronym for Language Integrated Query. It is Microsoft’s .NET Framework component. Traditionally before the c# LINQ introduction, developers have to learn multiple languages for retrieving and saving data for different data sources. For example, if you want to retrieve data from SQL or Oracle database you must learn some basics of SQL query language, and for retrieving data from XML files you need to learn XML parsers.

LINQ provides a standardized query language to query different data sources. You can retrieve and save data into SQL/Oracle database with the same code. Also, LINQ contains a set of extension methods that allow us to directly query data source objects to filter, group, join results. There are various LINQ enabled data sources that support query through LINQ like a collection of objects, databases or XML files. We can easily query and retrieve data from any object that implements the IEnumerable interface.

Here is the pictorial representation of the LINQ workflow with different variations: 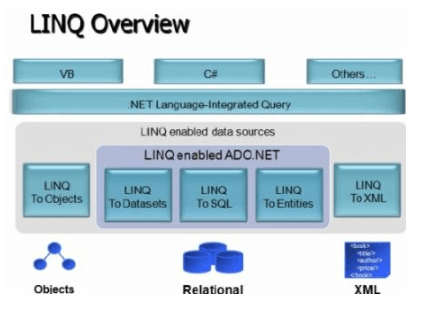 Various types of LINQ that are available in C# and vb.net are :

There are two ways in which we can write queries in LINQ :

Query syntax consists of a set of clauses written in a declarative syntax and looks very similar to SQL Queries. The .NET Framework CLR does not understand these queries. Hence, they are translated to method syntax at compile time.

The example above shows how the three parts of a query operation are expressed in source code. Here we have used an integer array as a data source. Similar methods apply to other data sources too.

In LINQ, Method Syntax uses extension methods included in the Enumerable or Queryable static classes. It is also termed as Method Extension Syntax or Fluent.
However, the compiler converts the query syntax in method syntax at compile time.
Let’s look at a Method syntax example –

Here result_list is the query variable which stores the result of the query expression. In the output list, we are getting those strings that do not contain “Dog” in it. We have used Where() method to filter the data source according to the lambda expression given in the Where() method. (s => s.Contains(“Dog”)).

After executing the query using for each loop we will get following in the output:

This is my Dog
Name of my Dog is Robin