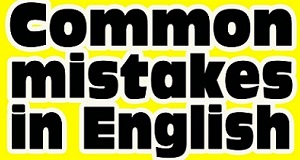 When you are getting familiar with a new language, confusion often occurs as a result of a written or spoken error. But there is no need to worry as people make mistakes all the time when learning new things. Even native speakers can be often observed making mistakes. The thing that we should remember is that we must learn from these mistakes for betterment. Some students who major in English become frustrated when they unknowingly make mistakes while speaking or writing and then spend a lot of time correcting those mistakes. Moments like these are unavoidable but they create an opportunity to learn.

Some of the common mistakes that could be avoided are stated below.

Pronunciation
Other than these mistakes, mispronunciation is also common usually among non-native speakers. Every non-native English speaker has a mother tongue which helps him to differentiate between various sounds. While learning a foreign language the speaker must know that a different language uses a unique set of sounds and orthographic rules. Following are some common pronunciation mistakes people make: