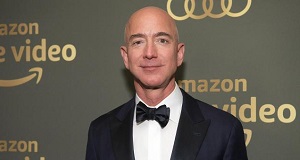 Introduction
Jeff Bezos is an American Entrepreneur and e-commerce pioneer. He is the founder and CEO (Chief Executive Officer) of “Amazon” the e-commerce website, and owner of ‘The Washington Post.’ He is one of the richest people in the world who got successful through his business ventures.

Young Bezos
Jeff Bezos was born on January 12, 1964, in Albuquerque, New Mexico as Jeffrey Preston Jorgensen. Jacklyn Gise Jorgensen, mother of Jeff Bezos was a teenager when she gave birth to him. His biological father was Ted Jorgensen who was a bike shop owner. They got divorced and Jeff was 4 years old when his mother remarried to Cuban immigrant Mike Bezos. The four-year-old Jorgensen was adopted by Mike and his surname was changed to Bezos. Jeff spent many of his young age summers at a family ranch near Cotulla, Texas, where his maternal grandfather Lawrence Preston Gise used to Live after he retired as a regional director of the U.S. Atomic Energy Commission (AEC) in Albuquerque. Jeff had a passion for computers and had scientific proficiency since his childhood.

Education
From fourth to sixth grade, Bezos attended River Oaks Elementary School. Bezos attended Miami Palmetto High School after his family moved to Miami, Florida. He worked at McDonald’s during the breakfast shift while attending high school. He graduated in 1986 from Princeton University with a 4.2 GPA (Grade Point Average) for Bachelor of Science degree in computer science and electrical engineering.

Career
After his graduation, Jeff Bezos worked on Wall Street in various related fields from the year 1986 to 1994. Bezos got offers for jobs at Bell Labs, Intel, Anderson Consulting and others. He first worked at Fitel, where his task was to build a network for international trade. He was promoted to head of development and director of customer service thereafter. He then joined the banking industry and became a product manager Bankers Trust where he worked from 1988 to 1990. After this, Bezos joined D. E. Shaw & Co where he became the fourth senior vice-president at the age of 30.

Amazon.com
In 1993, Bezos left his job at D.E. Shaw & Co and decided to start an online book store. The office was set up in his garage with a few employees. The operations expanded to 2 bedroom house with 3 Sun Microstations installed where a test site was developed. On July 16, 1995, 300 friends were invited to test the site after which Amazon.com was open. The company had instant initial success as Amazon.com sold books across the US and 45 other foreign countries in 30 days. The growth of the company was faster than what Bezos and his company expected and sales reached 20000$ per week in just two months. Two years later the company outpaced the competitors and became an e-commerce leader. Amazon offerings were diversified by Bezos as he started sales of CDs and Videos in 1998 in which electronics, clothes, toys and more were added later through major retail partnerships. Amazon sales proliferated from $510,000 in 1995 to over $17 billion in 2011.

Kindle was released by the company in 2007 a digital book reader through which a user could download, read and store their book selections. In the same year, Bezos invested in Blue Origin which is a Seattle based Aerospace company that develop technologies to offer space travel for paying customers. Bezos made Amazon enter into the tablet market by releasing Amazon Kindle Fire in 2000. The company’s next-generation tablet Kindle Fire HD was designed to give Apple Ipad a run for its money. Worldwide headlines were made by Bezos on August 5, 2013, when he purchased The Washington Post and other publications affiliated with its parent company, The Washington Post Co. for $250 million. The four-generation reign by the Graham family over The Post Co. came to an end. Bezos launched an experimental initiative called “Amazon Prime Air” which used drones for delivery services of Amazon. The drones could carry a weight of up to 5 pounds and can travel a distance of 10 miles from the distribution center, according to Bezos. He also said that this could become a reality in the coming five years.

Amazon Studios
With the development of original content through Amazon Studios, Bezos again scored a victory. Several new programs were premiered in 2013 after which the critically acclaimed Transparent and Mozart in the Jungle were released in 2014 which were a big hit. The first original feature film of the company Spike Lee’s Chi-Raq was produced in 2015. Bezos appeared in front of the camera in 2016 playing the role of an alien in Star Trek Beyond. He was a Star Trek fan since his childhood and now he has his name in the movie credits on IMDb.

Net Worth
Bezos became the richest person in the world in July 2017 when he briefly surpassed the Microsoft founder Bill Gates before dropping back to number 2, according to Bloomberg. The top spot was reclaimed by the Amazon in October and Bloomberg pegged his net worth to be $105.1 billion in January 2018, declaring him the richest person in history. Bezos was up to $127 billion, two months later, which equals the total wealth of 2.3 million average Americans.centre