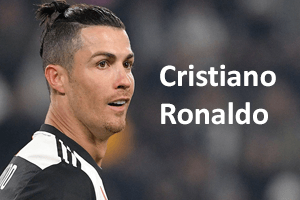 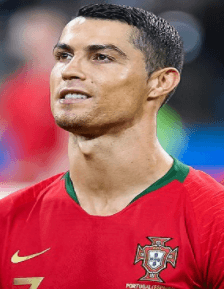 Cristiano Ronaldo (Cristiano Ronaldo dos Santos Aveiro) is a Portuguese professional player, born on 5 February 1985, who plays as a forward for Serie A club Juventus and is the captain of the Portugal national team.

He was born and raised in Madeira, Cristiano Ronaldo began his senior club career playing for Sporting CP, before signing with Manchester United in 2003, at the age of 18. After winning the FA Cup in his first season, he helped United win three successive Premier League titles, the UEFA Champions League, and the FIFA Club World Cup and at age 23 he won his first Ballon d’Or.

Cristiano Ronaldo dos Santos Aveiro was born in São Pedro, Funchal, on the Portuguese island of Madeira, and was raised in Santo António, Funchal.
As a child, Ronaldo played for amateur team Andorinha from 1992 to 1995, where his father was the kit man, and later spent two years in Nacional. While he was popular at school, he had been expelled after throwing a chair at his teacher, who he said had “disrespected” him. However, one year later, he was diagnosed with a racing heart, a condition that almost forced him to give up playing football. Ronaldo had to go through the heart surgery where a laser was used to cauterize multiple cardiac pathways into one, altering his resting heart rate. He was discharged from the hospital hours after the procedure and was able to resume his training a few days later.