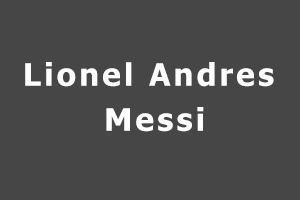 Lionel Messi was born on 24 June 1987 in Rosario, Argentina and belonging to a working-class family. Messi is an Argentina footballer who is currently playing for FC Barcelona and Argentina’s national team. He is one of the best players in football history and recently won ‘The Best FIFA Men’s Player 2019’.

Lionel Messi’s interest in football was from an early age and at the age of 5, Messi started playing for the Grandoli(a local club coached by his father). Well, his talent was soon apparent and at the age of 8, he was playing for Newell’s Old Boys. He was going good till the age of 11 because he was diagnosed with Growth Hormone Deficiency (GHD). GHD is a condition caused by insufficient growth hormone in the body. He was not from a well settled family and couldn’t afford to pay for medical expenses and local clubs were not willing to pay for his medical expenses. At age 13, Messi was offered to play for Barcelona under-14 and all his medical bills were to be taken care of by FC Barcelona, so he moved to Europe with his family and enrolled at the Barcelona’s youth academy. He played 14 games and scored 21 goals for the junior team. He made his debut in the 2004-05 season, broke the La Liga record for the youngest footballer to play a league game and also the youngest to score a league goal. Messi’s talent and love for football made him what today he is. So continuing his play he also made his debut for Argentina National team in 2005 and till now from his debut, he has scored more than 600 goals. Messi holds many records like Most Ballon d’Or awards, Most ESM Golden Shoes, Most Liga hat-tricks etcetera. He has broken so many records of football history and won every possible title for his club but he never won an International trophy for his National team nevertheless being unsuccessful for not winning any trophy he remained a “Tragic hero”.