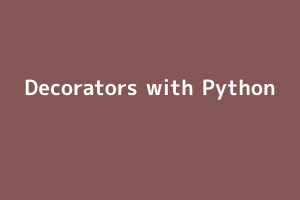 There is a very interesting feature in python known as Decorators, that is used to add additional functionality to the existing code.

Because this feature tries to modify the existing code functionality, this is known as metaprogramming.

Things that one should know before starting with decorators

One must be completely familiar with the concept of python, that everything in python is an object. These objects can be recognized using names that we give to objects. Functions are also objects with attributes. One can give many diff names to the same function object.
e.g.
def one(a):
print(a)
one(‘asd’)
two=one
two(‘asd’)0
o/p:
asd
asd

So in the above example, both functions one and two give the same result because both names refer to the same function object.

In the above example, return_fun returns the call_fun when called.

The objects which allow the __call__() method are called callable. So, a decorator is a callable object that returns a callable. In general, one can say, a decorator takes a function and adds some functionality, and returns it.

Here, in the above example deco() is a decorator. The function initial() is decorated by function deco(). Here as one can see how deco() changes or we can say add some new functionality to the initial function. It’s similar to wrapping a thing, so one can refer to a decorator as a wrapper within which some new or changed functionalities can be wrapped.

Note: the function carried out by the decorator will never gonna alter.

That’s why one can use @ symbol followed by the decorator function name and write it just above the function that one wants to decorate.