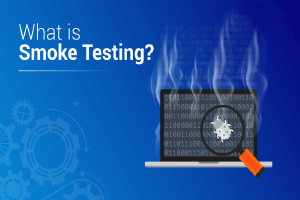 Smoke testing is a form of software testing in which the major functionality of an application is tested to confirm that it works properly. It is also called ‘Build Verification Testing’. It contains a set of non-exhaustive tests that verify the build is stable enough for further testing.

Smoke tests are created in order to verify that the basic functionality of a software package runs properly or not. If the tests fail, the testing team rejects the build until those basic errors don’ fixed.

The term ‘smoke testing’ is derived from the hardware testing, where a device when first switched on is tested for any smoke or fire. This ensures that the hardware’s basic components are working properly and no major failures are found.

Similarly, when we do smoke testing on the application, this means that we make sure that there are not any major failures before giving the build for exhaustive testing.

When to use it

It is used in the following scenarios:

The following tools will help you to make your smoke testing efforts more efficient: