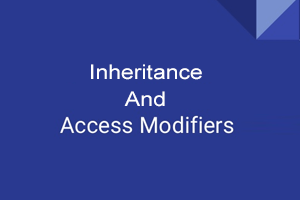 A child inherits the property of his parent. He can Acquire new properties or modify the inherited ones. Similarly, inheritance is a feature of OOP, which allows making use of an existing class without making changes to it. This can be achieved by deriving a new class (Derived class) from the existing class (Base class). More properties can be added to the derived class if needed. Therefore, the complexity of derived class may grow as the level of inheritance grows.
“The mechanism of driving a new class from the older one is called Inheritance. The old class is called the Base class or Super Class or Parent Class and the new one is called the Subclass or Derived Class or Child Class.”

For example, the Programmer is a class in itself. It is also a member of an Employee class as shown below:

OOP provides several benefits to the programmer. The principal advantages are:

Access Control provides a restriction for accessing the members of a class. It determines how a member can be accessed. The following access specifiers provided by PHP are:

Public Access:
A variable or method declared as the public has the widest possible visibility and accessible everywhere. The Public member of a class is visible or accessible to its own class, its derived classes and outside the class.

Private Access:
The Private members of the class can be accessed within their own class. They cannot be inherited by subclasses and are therefore inaccessible in subclasses.

Protected Access:
Class members are declared as protected when they can be accessed only within the class itself and by inheriting classes.

When one class extends the properties of Another class then we call it a single inheritance. In the below example, A is a parent class of B and B would be a child class of A.

In this , a class can inherit the properties of more than one parent class. For example; A, B are parent classes of C and C would be a child class of A and B.

PHP doesn’t support multiple inheritances but using Traits in PHP instead of classes, we can implement it.