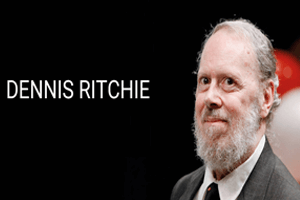 Dennis Ritchie or as we popularly know him as the “Father of C programming language”, was behind the scenes man who created C programming language. Born in a small town in Bronxville near New York in 1941, his father, Alistair Ritchie was a switching system engineer at the popular Bell Laboratories. When they later moved to New Jersey, Dennis graduated at Summit High School and got a bachelor’s degree from Harvard University in Physics and Applied Mathematics in 1963 and later on decided to pursue a Ph.D. in Mathematics in 1968 from Harvard University. Later on, Dennis would move to MIT, where he worked alongside other scientists to develop advanced computer systems and software.

Dennis also began working on OS for portable computers as most computers during those days would take up entire rooms to fit in and had limited access. Ritchie got helped from many of his colleagues at cracking this. They wanted to build something that could handle thousands of users at once and could be run 24*7. In doing so, Ritchie would never see programming language as a hindrance, he would rather see it as a puzzle that needed solving.

After graduation, Ritchie had found interest in computers rather than Physics (his graduation subject) and got a job at Bell Laboratories (where his father used to work). Ritchie was quoted saying “Instead of focusing on the specific projects, I wanted to be around people who had a lot of experience and ideas. Towards that goal, I started working on various projects to learn my way around the profession.”

Along with the talented Kenneth Thompson, Ritchie started working on minicomputers as they had found that the smaller machines were actually the future. To that aim, they started looking for much simpler and feasible interaction among various computers. When they had succeeded in doing this, to their surprise, they had written Unix operating system. This was necessary to copy, delete, print or edit any data file. Without an OS, computers would have been the forte of few experts rather than of any person enjoying their benefits. Unix made the OS easy and comprehensible and comparatively cheaper than other OS available at the time. This also meant that users would have the option of changing the software that came along their machines. They could also install a variety of software because Unix was made to be compatible with all of them. This was not possible earlier hence opened infinite opportunities.

Unix used to be written in machine language that had a smaller vocabulary and could not attend to multiple computers at the same time. To solve this problem, Ritchie combined some attributes of older systems with the new ones and came up with C language. Due to its easy comprehensibility and clarity, C started becoming the dominating programming language. Using a few instructions and quite smaller syntax, it still was extremely structured and solved many tiny problems that a developer would face. Companies soon started developing their own software with the help of C language as it was easily available in libraries so that developers could easily access it and copy the relevant code instead of starting from scratch. In this way, C language had already begun to revolutionize the software industry that was booming at the time.

Until 1973, Thompson and Ritchie had already re-written Unix by using C language instead of using any machine language. According to Ritchie himself, the language had become so simple that experts and scientists had started shifting their focus on smaller computer machines which they never wanted to do. Ritchie also made a point in saying that all his success was due to the fact that he did not have any educational background in computers which made him think out of the box and do extraordinary things which could not have been imagined by someone who had studied computers.