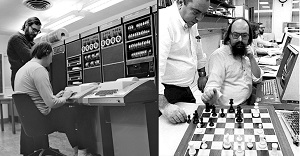 Who is Ken Thompson?

Known for being awarded as the first recipient of the IEEE Computer’s Society’s Tsutomu Kanai Award for his contribution in the field of Computing System, Kenneth L. Thompson is also popular for being the co-creator of Unix as well as a prototype of B language, which paved the way for today’s C programming language. His research has particularly transformed the computing world and gave the vision to imagine the new paradigms of Operating Systems, Computer Games, Data and Voice Programs. His life journey motivates not just today’s developers but also anyone who has the vision to do something big in life. His philosophy of keeping things plain and simple but effective and extraordinary has motivated many in his field. Let us know a little bit more about him.

He was born on February 4th, 1943, in New Orleans, Louisiana. Ken’s father was in the US navy and his family used to move places quite often. Ken did his Bachelorette of Science in the year 1965 and went on to complete his Master’s in Electric Engineering and Computer Science (1966) from the University of California, Berkley.

His Career at Bell Laboratories

After completing his graduation Ken Thompson and Dennis Ritchie joined Bell Laboratories’ Computing Sciences Research Center in Murray Hill. At this time, researchers here had quite a reputation of working expertise in Computing Theory, Programming Languages, Programming and Computer systems. In the late 1960s, Ken became part of the popular Multics project which was an effort among the Bell Labs, MIT, and General Electric to develop novel Operating Systems. However, Bell Labs withdrew from the project due to some complications but Ritchie and Ken Thompson kept working on it. As a result, an Operating System was established with the basic file system that is today known as UNIX.

Created in 1969, as the first portable operating system, Unix laid the foundation for a new networking paradigm in computing. After this spectacular invention, computers could no longer have to be seen in isolation from one another. Moreover, it is widely used these days in academic settings. It was also designed to run on various platforms, from mainframes to PCs. Being distributed for free since its inception, the Unix OS has been constantly evolving through its source code that is available to the wide community of its users.

Being created as a child-version of the MIT MULTICS OS that as supposed to run on the smaller and latest minicomputers. It’s popularity gained so much in the computing community that many scientists, who liked working on large and heavy computers started getting attracted to smaller minicomputers that gave a new dimension to the world of computer systems. When Unix was re-written in C language by Dennis Ritchie, it became completely portable that operated on the system capable of running on various different hardware platforms. As a result, we notice that C language became quite popular and is being widely used by programmers and scientists throughout the world.

Thompson was elected to the prestigious National Academy of Engineering in 1980 for designing Unix. In 1985, he was elected as a member of the National Academy of Sciences (NAS). Thompson and Ritchie were jointly awarded the Turing Award for the development of generic OS theory and implementation of Unix OS and both of them also received IEEE Richard W. Hamming Medal from IEEE for the invention of Unix and C programming language. The duo was also elected as Fellows of Computer History Museum for the creation of Unix and C Language. In 1999, both received a National Medal of Technology from U.S. President Bill Clinton for the co-creation of Unix and C, thereby opening a plethora of opportunities for the scientist community that stimulated growth and furthered the development of digital information age.

In 2000, Thompson finally retired from Bell Laboratories and moved to Google in 2006 as a distinguished engineer. Here, he is known for developing the popular programming language Go.

What is Ken Thompson popular for?

Thompson is popular for being the co-creator of Unix as well as a prototype of B language, which paved the way for today’s C programming language.

When was Unix created?

Unix was created in 1969 as the first portable operating system and laid the foundation for a new networking paradigm in computing.

When did Ken Thompson retire from Bell Laboratories?

Ken Thompson retired from Bell Laboratories in the year 2000 and moved to Google in 2006 as a distinguished engineer.

From where did Ken completed his masters?

Ken completed his Master’s in Electric Engineering and Computer Science in the year 1966 from the University of California, Berkley.