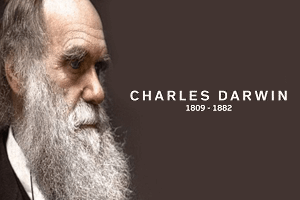 Charles Darwin, in full Charles Robert Darwin, was a British naturalist and biologist. He was known for his theory of evolution and his understanding of the process of natural selection. In 1831, he started on a five-year voyage around the world on the HMS Beagle(a vessel of Royal Navy), during which time his studies of various plants and animals led him to formulate his theories. In 1859, his landmark book “The Origin of Species” was published.

Charles Darwin was born on February 12, 1809, in a small market town of Shrewsbury, England. Darwin was the second youngest of six kids who loved to explore nature.

Darwin came from a long line of scientists. His father, Dr. Robert Waring Darwin, was a medical doctor and his grandfather, Dr. Erasmus Darwin, was a renowned botanist and poet fashionable before the French Revolution, who was also the author of Zoonomia; or the Laws of Organic Life (1794–96). Darwin’s mother, Susanna, died when he was eight years old and he was cared for by his three elder sisters.

Darwin was brought up in awe of his overbearing father whose sharp medical observations taught him much about human psychology. Darwin studied between 1818 and 1825 at the traditional Anglican Shrewsbury School where he hated the rote learning of Classics. At that time, Science was considered dehumanizing in English public schools. Being a week student in chemistry, Darwin was condemned by his headmaster (and nicknamed “Gas” by his classmates).

His father considered him a 16-year-old wastrel interested only in games. Therefore, in October 1825, at age 16, Darwin was sent to the University of Edinburgh to study medicine. He learned much in Edinburgh’s rich intellectual environment, but not medicine. The young Darwin hated anatomy, and (pre-chloroform) surgery sickened him. Darwin’s early interest in nature led him to study natural science. At Edinburgh University, he was taught to classify plants by the modern “natural system” and understand the chemistry of moderating rocks on the primitive Earth.

Darwin’s freethinking father suggested he become a parson instead of an aimless naturalist, therefore he switched him to Christ’s College, Cambridge, in 1828. In a complete change of environment, Darwin was shown the conservative side of botany(the scientific study of plants) by a young professor, the Reverend John Stevens Henslow.

While Darwin was at Cambridge, his botany professor Henslow became his mentor. After Darwin’s study from Christ’s College with a bachelor of arts degree in 1831, he was recommended by Henslow for a naturalist’s position aboard the HMS Beagle.

The ship(HMS Beagle), commanded by Captain Robert FitzRoy took Darwin to a five-year survey trip around the world. Five years of physical hardship and mental rigor offset by wide-open opportunities in the Andes Mountains and the Brazilian jungles were to give Darwin a new seriousness.

Over the journey, Darwin collected a variety of natural specimens, including birds, plants and fossils. His discoveries about various species raised more questions. Fossil extraction pushed Darwin into thinking of the primeval world and what had caused those giant beasts to die out.

In 1836, upon his return to England, Darwin began to write up his findings in the Journal of Researches, and later edited into the Zoology of the Voyage of the Beagle.

Darwin’s view of natural history had been greatly affected by the trip. He began to develop a revolutionary theory about the origin of living species. Most of his theories contraried to the popular view of other naturalists at the time.

Darwin’s theory of evolution declared that species survived through a specific process called “natural selection”. This is the process by which organisms change over time as a result of changes in heritable physical or behavioral traits. Those species that successfully adapted the changes of their natural habitat thrived and reproduced, while others that failed to evolve and reproduce died off.

Through his observations and studies, Darwin noticed that there were similarities among species all over the globe, along with variations based on specific locations. This led him to believe that the species we know today had gradually evolved from common ancestors. On November 24, 1859, a detailed explanation of his theory in his best-known work was published, on the Origin of Species by means of Natural Selection.

The theory of evolution and the process of natural selection defined by Darwin later became known simply as “Darwinism.” In the 20th century, DNA studies came up with scientific evidence for Darwin’s theory of evolution. However, the controversy surrounding its conflict with Creationism.

Darwin’s life was totally devoted to research. At the age of 73, his stomach problems somewhat diminish but his memory deteriorating. The father of evolution succumbed to heart failure. He died at his family home, Down House, in London, on April 19, 1882. He was buried at Westminster Abbey, London.