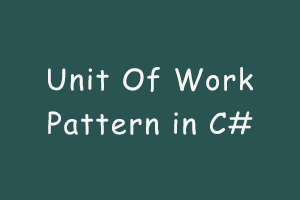 Unit Of Work Pattern in C#

Let’s get some brief introduction about Repository Pattern:

A repository design pattern is basically the coding standard that separates the data access logic and maps it to the entities in the business logic. i.e. It introduces a middle layer to communicate with databases.
This type of implementation involves the use of one repository class for each entity. For example, if you have two entities Order and Student, each entity will have its own repository (OrderRepository.cs and StudentRepository.cs).

Suppose we have to do CRUD operations with order data and Student data
In that case, both repositories (OrderRepository.cs and StudentRepository.cs) will generate their own instances of the DbContext to do different operations. This may cause issues as each DbContext will have its own in-memory list of changes of the records that are being added/updated/modified, in a single transaction. So, In that case, if the Save method of one of the repositories fails and another one succeeds then it will result in database inconsistency. This is the case where we can use the UnitOfWork pattern.
So, we can add a UnitOfWork class/layer that will act as a centralized store for all the repositories to receive the instance of the DbContext.