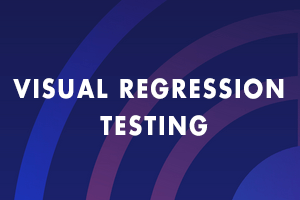 Visual Testing is the process of testing an application’s graphical user interface (GUI) as appearing to the users. The main purpose of the visual regression testing is to find visual bugs like font-matching, layout, and other rendering issues so that they can be fixed before they are visible to the end-user. Apart from that, visual testing is used to verify the content visible on a page. This type of testing is very important for sites that use graphical functionality like charts, dashboards, etc. because identifying the bugs with traditional automated functional testing tools is very challenging.

The nature of visual testing can be complex, depending upon the number of variables like web browsers, operating systems, screen resolutions, responsive design, etc. Nowadays this complexity of visual testing is manageable with existing open source and commercial solutions, which make it easier to automate.

Responsive layouts are one of the most difficult aspects to test. It is more tedious to design and test all of a project’s screen elements at every breakpoint than it is to code them in the first place. Visual regression allows you to make visual comparisons between the baseline versions of the site and the version in development. The process of visual regression testing starts with taking the screenshot of the original design and comparing it with the new, looking for the pixel differences. Visual regression comes in various formats, using a variety of technologies and workflows as mentioned below.