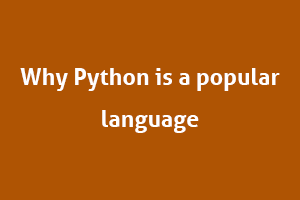 Why Python is a popular language

Python lets developers be more efficient and optimistic about the applications they’re creating, from creation to implementation and maintenance. It’s simplicity and stability, as well as access to excellent libraries and frameworks for AI and machine learning (ML), accessibility, platform independence, and a broad community, make it the best choice for machine learning and AI projects. Both are in addition to the language’s general success.

Python provides code that is both straightforward and readable. Machine learning and AI are built on complicated algorithms and modular workflows, but Python’s flexibility helps developers to write accurate programs. Instead of dwelling on the technical complexities of the language, developers should dedicate all of their energy to solving an ML problem.

The number of frameworks & libraries.

Python frameworks and libraries are used by programmers to minimize development time.

Python as a language for AI development

AI and deep intelligence have made spam filtering, recommendation systems, search engines, digital assistants, and fraud detection systems feasible, and there will certainly be more in the future. Product owners tend to build high-performing applications. This necessitates the creation of algorithms that intelligently process data, allowing machines to behave like a person.