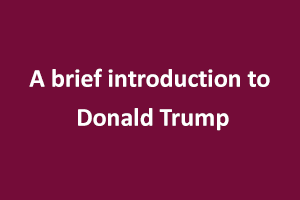 A brief introduction to Donald Trump

Who is Donald Trump?

Donald John Trump was born on June 14, 1946, in new york, U.S. He is the current and 45th president of the U.S(United States). Initially, He was a real estate developer and businessman who owned his own hotels, casinos, Golf courses, Resorts, and many more properties in New York and around the whole world.

Donald Trump was born on June 14, 1946, in Queens, New York. He was the son of Fred, a real estate developer, and his wife, Mary, a homemaker, and Scottish immigrant. He was the second youngest of five children. He attended private school in queens before enrolling in the new york military academy for eighth grade. After that, Trump studied for two years at New York City’s Fordham University then he was migrated to the University of Pennsylvania’s Wharton School of Finance and Commerce, where he got an undergraduate degree in 1968.

After completion of the study from college, Donald Trump joined his father’s company E. Trump & Son, which developed apartments for the middle-class in New York City. He became the president of this company in 1974. He continued to develop the number of real estate properties with the construction of such high profile projects as the Grand Hyatt New York hotel, which opened in 1980, and Trump Tower, a luxury high rise tower that opened in 1983. In the 1980s, Donald Trump opened hotel-casinos in Atlantic City. With these achievements, in 2016, he became the first billionaire elected to the White House.

In 1977, Donald Trump was married to Czech model Ivana Zelnickova, with whom he has three children, Donald Trump Jr., Ivanka Trump, and Eric Trump. He divorced Ivana Zelnickova in 1992 and that year Trump married actress Marla Maples, with whom he has a daughter, Tiffany Trump. Trump ended his second marriage in 1999, he was married to Slovenian model Melania Knauss in 2005. He has one son with Melania Trump named Barron Trump who was born in 2006.

Being the most extensively used JavaScript library, a jQuery Certification Exam will add enormous value to your skill-set. jQuery provides various functionalities to the developer in order to develop complex applications with ease and efficiency.