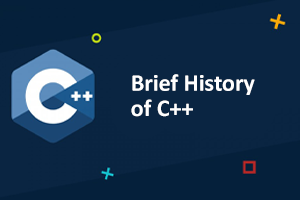 Development for C++ language was started in 1979 when Bjarne Stroustrup was doing work for his Ph.D. thesis. His goal was to add object-oriented programming into the C language and hence he launched C with classes (C++) in 1980.

“C with Classes“, as implied by the name, was meant to be a superset of the C language. This language included inlining, default function arguments, classes, basic inheritance, and strong type checking in addition to all the features of the C language.

The name of the language was modified from C with Classes to C++ in 1983. The ++ operator within the C language is an operator for incrementing a variable, which provides some insight into how Stroustrup regarded the language. Several new features were added around this time, the most notable ones of which are function overloading, virtual functions, references with the & symbol, the const keyword, and single-line comments using two forward slashes.

In 1990, “The Annotated C++ Reference Manual” was released all over. The same year, Borland’s Turbo C++ compiler would also be released as a commercial product. Turbo C++ added a plethora of additional libraries which might have a considerable impact on C++’s development. Although the last stable release of Turbo C++ was in 2006, the compiler is still widely used.