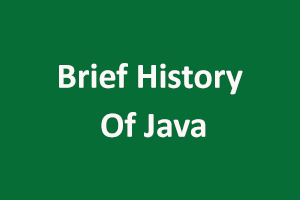 The history of Java is very interesting. Java was originally designed for interactive television, but it absolutely was too advanced technology for the digital cable television industry at the time. Java team members (also referred to as Green Team), initiated this project to develop a language for digital devices like set-top boxes, televisions, etc. However, it was suited for internet programming. Java technology was incorporated by Netscape later.

Java was developed by James Gosling, in 1995. James Gosling along with his team started the project in the early ’90s.

The syntax of Java resembles C++ as it was mostly derived from it. However, C++ merges the syntax for object-oriented programming, generic and structured but java was built from the base up to be a virtually fully object-oriented language.

The second characteristic of java is its Object orientation (“OO”), which refers to a method to design software so that the various types of data it manipulates are combined together with their relevant operations. Hence, data and code are combined into two separate entities called objects.

The second characteristic is platform independence, which means that programs written in the Java language must run similarly on different hardware. A person writes a program once and runs it anywhere.

The third characteristic is Java’s automatic memory management model is to spare the programmer the burden of performing manual memory management. In some languages, the programmer is responsible for memory allocation to create any object stored on the heap and is also responsible for later manually deallocating that memory to delete any such objects.