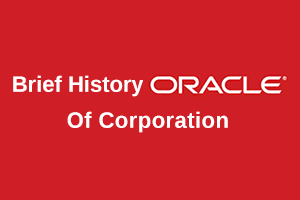 Initially, in 1977 the company was co-founded by Larry Ellison with Bod Miner and Ed Oates under the name Software Development Laboratories (SDL) in Santa Clara, California. By 1978 Oracle’s first version 1 was written in assembly language (AL) running on PDP-11 under RSX-11 in 128K of memory. Officially Oracle does not release version 1. In 1979 SDL named itself RSI (Relational System Inc) and moved to Menlo Park, California. The same year oracle released its first Commercial RDBMS.

In 1982 RSI was renamed Oracle System Corporation under the Vice Presidency of Umang Gupta who wrote the business plan for the company. Oracle was rewritten in C language for portability in 1983 and released as Oracle v3. Soon after in 1984 oracle v4 released with a unique capability of reading consistency. Later in 1987 UNIX-based oracle applications. In 1988 oracle induced PL\SQL in its v6 with hot backups, embedded PL\SQL procedural engine, and support for row-level locking. In 1989 oracle relocated its headquarters to Redwood Shores, California.

The Oracle product comes in a number of flavors: