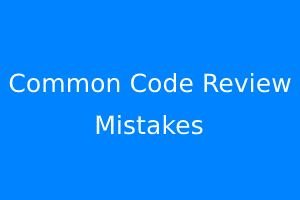 “Making a mistake is not a mistake, but repeating mistakes is certainly a mistake.”

Along with this, there is a way to find mistakes in the code through code review and to improve the quality of the same. Code review can be understood as a systematic process of evaluating and checking the code produced at the development level. This analysis of code is an ideal way to look at code written by four or more eye principles that provide a comprehensive view and opinion.

Different organizations and people have different definitions of code review. It is not a rigid, fixed process that demands a proper format or mechanism. Trial and error is the key! You need to find out what works best for your company and your employees. Code review when done properly can enhance the overall quality of the project by harnessing its full potential. Along with this comes the risk of some mistakes, which should be taken care of while reviewing the code.

Ultimately, derailing a code review means more work for everyone, the developer, the reviewer, and the whole team. Problems or mistakes in code review can not only affect the entire work environment but can also poison the team. The above list of common mistakes makes you aware of some of the mistakes that you as a developer or reviewer can make. Code reviews may not always be fun and enjoyable, but they are very important from a professional standpoint.

Code review is an exceptional method, one of the most valuable. You can use it to extend the consistency of a certain code, confront and discuss something with your team, or simply share your information.