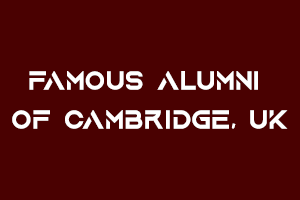 The second oldest university in the world is Cambridge University in the UK. It was Founded in 1209 and granted a charter by King Henry III in 1231. The University counts 7 Turing Awards recipients, 11 Field Medalists, 15 British Prime Ministers, and 118 Nobel Laureates studied there. Cambridge is formed from 31 colleges. Now here is the list of some most successful and famous alumni of the University throughout its history.

Bjarne Stroustrup is a well known Computer Scientist. He was born in Aarhus, Denmark in 1950. He completed his graduation and got a master’s degree in mathematics and computer science from the University of Aarhus in 1975. He is willing to learn microprogramming and machine architecture. In 1979, he took his Ph.D. Degree in computer science from Cambridge University. He designed and implemented the C++ programming language. In 2004 he was elected to the National Academy of Engineering “for the creation of the C++ programming language.” He was felicitated by different kinds of awards like the “IEEE Computer Society Award”.

Issac Newton was famous for Newton’s laws of motion across the globe. He was born in Woolsthorpe, Lincolnshire, England on January 4, 1643. Due to his father’s death before he was born he was forced to pursue farming. Perhaps sensing the young man’s innate intellectual abilities his uncle soon sent him to the Trinity College where he completed his education. He had contrived the laws of motion and universal gravitation. After that, he used Kepler’s law of motion to eradicate the Solar System’s heliocentricity which gave him world recognition. Later he was honored with a Knight Bachelor in 1705.

Emma Thompson is an English actress and screenwriter and widely known for her sophisticated and witty performances and later for her award-winning scripts. She was born in Paddington, London, England on April 15, 1959. She graduated in English literature from Newnham College the University of Cambridge in 1980. She performed with the comedy troupe in Footlights. She worked as an assistant writer, producer, and director of the first all-female revue “Woman’s Hour” (1983) at Cambridge University. In the 2001 Orange Film Survey of greatest British film actresses, she got the fifth rank. She was honored by two Oscar awards and academy awards etc.

Charles, Prince of Wales was born on 14 November 1948 at Buckingham Palace. Charles Philip Arthur George is the full name of Charles. He is the first grandchild of King George VI and Queen Elizabeth. He completed his graduation from Cambridge with a Bachelor of Arts on 23 June 1970. Later he was awarded a Master of Arts degree from Cambridge. He was the longest-serving Prince of Wales. He had served in the Royal Air Force and Royal Navy from 1971 to 1976. He is also an author and co-author of a number of books.

Stephen Hawking was born in Oxford, England. He was the world-famous theoretical physicist and cosmologist. He was the author of an international bestseller book i.e “A Brief History of Time”. He completed his schooling from St Albans School. In October 1962 he started his graduation at Trinity Hall, Cambridge, and received a research fellowship at Gonville and Caius College at Cambridge. In March 1966 he got his Ph.D. degree in applied mathematics and theoretical physics, specializing in general relativity and cosmology. Between 1979 and 2009 he was the Lucasian Professor of Mathematics at the University of Cambridge. At the time of his death, he was director of research at the Centre for Theoretical Cosmology at the University of Cambridge.

Rajiv Gandhi was born on 20 August 1944 in Bombay, British India. He was the 6th Prime Minister of India from 1984 to 1989. At the age of 40, he was the youngest Prime Minister of India and one of the youngest elected heads of Government in the world. He completed his schooling from Welham Boys’ School, Dehradun, and Doon School, Dehradun in 1954. After leaving school he studied engineering at Trinity College, Cambridge but did not complete his degree and moved to Imperial College London and completed a course in mechanical engineering. Later he became a pilot and worked in Air India. He entered politics on 16 February 1981. In 1984 after the assassination of his mother, Prime Minister Indira Gandhi he took the office.

Srinivasa Ramanujan was born on 22 December 1887 in Erode, British India. He was an Indian Mathematician. He was one of India’s greatest mathematical geniuses. He was known for his remarkable contribution in the field of mathematics. At the age of 11, he had exhausted the mathematical knowledge of two college students who were lodgers at his home. In 1913 English mathematician G. H. Hardy Recognized his work as extraordinary and arranged for him to travel to Cambridge. He was the youngest Fellows of the Honorary Society and only the second Indian member, and also the first Indian to be elected a Fellow of Trinity College, Cambridge.