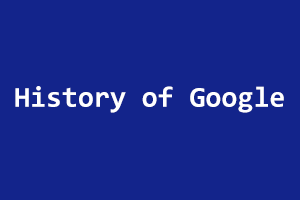 ‘Journey from the garage to the Googleplex’

Google was officially launched in 1998 by Larry Page and Sergey Brin to the market. Students at Stanford University in California, Larry Page and Sergey Brin, developed a search algorithm as their research project in 1996 called “BackRub” with the help of Scott Hassan and Alan Steremberg. The search engine was soon successful and the expanding company moved several times, finally settling in Mountain View in 2003. Recognized as one of the fastest-growing companies in the world, it made its initial public offering in 2004 and became one of the largest media companies in the world. The company launched Google News in 2002, Gmail in 2004, Google Maps in 2005, Google Chrome in 2008, and a social network called Google+ in 2011 (it closed in April 2019), among many other products. In 2015, Google holding company became a major subsidiary of Alphabet Inc.

Google’s origins are in the research project “BackRub” started in 1996 by Larry Page and Sergey Brin while they were Ph.D. students at Stanford University in Stanford, California. The unofficial “third founder” at the beginning of the project was Scott Hassan, the lead programmer who wrote most of the code for the original Google search engine, but he left before it was officially established as a company. He continued his robotics career and founded Willow Garage in 2006.

Working from their garage, they built an algorithm that used links to work out the importance of individual pages on the World Wide Web. They called this search engine BackRub. Later, Page and Brin began working on developing Google, which fueled the intense reviews that BackRub received. It was a very shoestring project at the time. Working from their dormitories, the couple of servers they built using cheap, used and borrowed personal computers. They bought terabytes of disks at discounted prices with their credit cards.

Meaning Behind the Name:

The name “Google” actually came from a graduate student at Stanford University named Sean Anderson. Anderson suggested the word “Googolplex” during a brainstorming session, Larry Page countered it with the word “Googol”. Googol is that the digit 1 followed by 100 zeroes, while googolplex is 1 followed by a googol zero. Anderson checked to see if the domain name had been taken, but accidentally searched for “google.com” instead of “googol.com” Larry Page preferred the name and registered the domain name for Brin and himself on September 15, 1997. Before that they were using the Stanford website with the domains Google.stanford.idu and z.stanford.edu.

After further development, the Google search engine eventually became hot not only the academic community but Silicon Valley investors as well. Sun Microsystems co-founder Andy Bectol‌sheim was so impressed that after a quick Google presentation, he said to them, “Instead of discussing all the details with us, why shouldn’t I write you a check?”

Although Google does not yet exist as a legal entity, Bechtolsheim’s check was issued to $100,000 and to Google Inc. The check allowed them to collect $900,000 more, for their initial round of funding. Other angel investors include Amazon.com founder Jeff Bezos.

With enough funding, Google Inc. opened its first office in Menlo Park, California. Google.com, a beta (test status) search engine launched and answers 10,000 search queries every day. Then they officially removed the beta from its title on September 21, 1999.