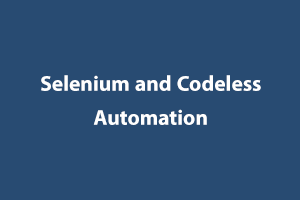 Software testing is where everything boils. Today’s fast-growing technologies are completely eliminated by machines, and their performance is controlled by a software system that empowers them. Do the machines perform the way we want them to? Every time? All over? The answer to these questions lies in software testing.

Selenium is a powerful automated open-source suite of software. Spending many hours testing a web application to make sure it works within and outside the local development environment is expected. Selenium is a suite of software that includes various tools and suites of libraries that perform the automation of web browsers. It provides extensions to simulate user interaction with browsers, a distributed distribution server, and W3C WebDriver definition functionality that allows you to write dynamic code across all major web browsers.
The theme for Selenium is WebDriver, an interface for writing command sets that can be run consistently in most browsers. Selenium can be used for any function that requires an automatic connection with the browser.

Selenium is the most popular automation testing tool for web applications:

But with the growing popularity of AI and ML, upgrades are being introduced to Selenium in 2021. Both Learning Machines and AI aim to provide alternatives for repetitive and error-based tasks. Test-craft and many other tools are already on this platform of codeless things. Powered by Selenium and AI, these automation tools provide support for non-code automation testing. With such a recent trend in automation testing, testers are now able to automatically generate Selenium self-adhesive code. AI-powered tools can simply detect changes in the web application and modify the script accordingly. With these tools, testers will no longer need to think about the maintenance of test cases.
Codeless Automation testing creates flexible tests without writing a single piece of code. It is necessary to reduce the number of test attempts spent and the time spent on repeated test cases in an effort to impersonate the code. Its operation is simple, recording manual tests and then playing backwards by creating test flow diagrams. This approach has been gradually evolving with new technological innovations, with a strong focus on simplifying coding and making it easier to use. The main purpose is to make the setup much easier to use so that the default testing is less time-consuming and does not require encryption efforts. To make the process test seamlessly with the truth.

How does this work?

There are many methods for codeless testing. Two of the most notable features include recording hands-on tests and playing them back, as well as creating sketches for systematic tests that are used to perform tests. The recording and playing method is now the most popular and most popular web-based product. The concept of this method is that the tester performs the test manually, which records the tool with a click. The tool then creates scripts to make the test change itself. Examiners can also edit documents, as well as the testing process to best suit their needs.

Will it has been a danger to automation testers
In the foreseeable future, the need for automation codes will not vanish. Coded testing can be a tool for automation testers to speed up their operations instead of changing their jobs. In the foreseeable future, the tools will be smart enough to completely eliminate the need to enter test codes, allowing test commands to be transferred directly to the system in a complete code-free package. Currently, automated testing is a very important requirement in any software development process.

Tools:
There are some tools that use this type of automation to enable the automation of test cases:

*Testsigma lets the automation be done directly on the cloud.