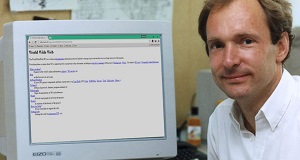 Introduction
Tim Berners-Lee is a British computer scientist who invented the World Wide Web (WWW). Berners-Lee enabled a method to be able to view hypertext documents (web-pages) through the internet. He also serves as a director for the World Wide Web Consortium (W3C) which manages standards for the Internet and World Wide Web. Tim Berners-Lee was born in London, England on 8th June 1955. Tim Berners-Lee’s full name is Timothy John Berners-Lee. After completing his A Levels at Emanuel School, he went to Queen’s College of Oxford University where he received his first-class degree in physics.

Early Life
After graduation, he gained employment in a printing firm based in Plessey, Poole. He was employed as an independent contractor in 1980 at CERN in Switzerland. An essential role of his job included sharing information with researchers in different geographical areas. To help this process, he suggested a plan based on the use of hypertext (a language for sharing text electronically). The first prototype system was known as ENQUIRE. The Internet had been developed since the 1960s as a way to transfer information and data between different computers placed very far away. However, Tim Berners-Lee attempted to make use of internet nodes and combine it with hypertext and the idea of domains. Tim Berners-Lee later stated that all the technology associated with the internet and the web had already been developed – ‘hypertext’, the internet; his participation was to put them all together in one complete package.

Personal Life
He has married twice – first to Jane Northcote and second to Nancy in 1990. Tim Berners- Lee has two children with Nancy. They got divorced in the year 2011. Then, Tim Berners-Lee got married to Rosemary Leith in 2014. He is a member of the Unitarian Universalist (UU) Church and appreciates the liberal, ecumenical approach of the church, which stresses the innate dignity of people and in working together to achieve harmony and understanding. Despite the expanse of his invention, Berners-Lee is not too rich. Unlike other counterparts, like Marc Andreessen, co-founder of Netscape, is now a millionaire. He drove a 13-year-old VW Beetle for many years which was recently replaced with a VW EOS. He seems gratified with the non-profit trail he took.

Short Biography
In 1990, with the help of Robert Cailliau, Tim Berners-Lee created the first version of the World Wide Web also the first web browser as well as the first web server. It was put online in the year 1991. “Info.cern.ch” was introduced as very first website address of the world and web-server, running on a NeXT machine at CERN. The first web page address tested was: http://info.cern.ch/hypertext/WWW/TheProject.html. Basically, the contribution of the World Wide Web was to make it easy for people to view hypertext web pages (HTML) anywhere in the world through the internet. The primary components of this new development were:

In 1994, Berners-Lee founded the World Wide Web Consortium (W3C) at the LCS (Laboratory of Computer Science) at the Massachusetts Institute of Technology located in Boston, U.S. This organisation tries to improve the quality and standard of the world wide web. He could have tried to monetise his invention but decided to offer the world wide web with no copyright and no royalties due. Berners-Lee was also bothered about problems relating to freedom of information and censorship on the internet. Tim Berners-Lee also said if he hadn’t – later on, someone else would have come up with a free idea. Berners-Lee is humble about his achievement, stating the work of others involved in improving the features of the internet. However, others argue that Berners-Lee was prominent in shaping the free, open-source nature of the early internet.

Awards
Tim Berners-Lee has received many orders including a knighthood, an OBE and Order of Merit – becoming one of only 24 living members qualified for the honor. He was entitled in 2004 “for services to the global development of the Internet.” Tim Berners-Lee was acknowledged for his innovation of the world wide web in the Summer Olympics 2012 opening ceremony. During this ceremony, he tweeted: “this is for everyone.” The tweet was broadcast live to the 80,000 audience and TV viewers. Tim Berners-Lee was one of the first three recipients of the ‘Mikhail Gorbachev’ Award for “The Man Who Changed the World” on March 30th, 2011, at the inaugural awards ceremony held in London, United Kingdom. Time Magazine listed Tim Berners-Lee in its list of 100 most influential people of the Twentieth Century.