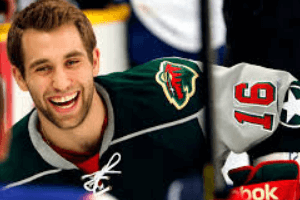 Who is Jason Zucker?

Jason Alan Zucker is an American professional ice hockey player currently playing for the Pittsburgh Penguins of the National Hockey League (NHL). He was the youngest member of the U.S. World Junior Team that shocked Canada in January 2010 and won gold medal in the biggest amateur tournament (20-under) in the world.

He belongs to the Jewish community and was born to Scott and Natalie Zucker in Newport Beach, California, on January 16, 1992. His father Scott Zucker was a general contractor of ice and roller rinks building and mother Natalie Zucker, a former competitive figure skater. He has 3 brothers and one sister. Zucker was married to Minneapolis-based sports and entertainment journalist and television personality Carly Aplin in 2016.

Zucker’s family moved to Nevada in Las Vegas, when he was 2 months old. He grew up under a warm-weather climate, and where he learned his first experience with hockey on the rollerblades. He used to play along with his brothers with ice skates in the area which was covered with a sheet of ice at the Santa Fe Station or the Fiesta Rancho.

As a youth, he played in 2004 and 2005 Quebec International Pee-Wee Hockey Tournaments with a minor ice hockey team from Los Angeles.

At the age of 15, he moved to Plymouth, Michigan for two years where he could play with the Compuware AAA Minor Midget Team and attended the U.S. National Development Program in Ann Arbor, Michigan. He played in under-17 and under-18 teams for the U.S. the past two years in Michigan. Zucker and goalie Jack Campbell became the first Americans to win three gold medals for International Ice Hockey Federation in 2010.

He was also a member of Team USA’s bronze medal-winning team at the 2011 World Juniors. He was ranked second at the University of Denver of the Western Collegiate Hockey Association and became first-ever man from Nevada who was drafted into the NHL in the second round (59th overall) selection of the 2010 NHL Entry Draft by the Minnesota Wild.

In the period 2014–15 he scored 21 goals in 51 games and scored a tenth place in the NHL. Zucker set a Wild franchise record by scoring 10 seconds into a 5-4 win against the Winnipeg Jets on Oct. 25, 2015. He is continuing his different success stories of achievements with the Minnesota Wild team in NHL till now.