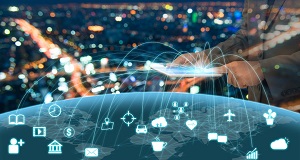 A Brief History of the Internet of Things

IoT
The Internet of Things (IoT) has been around for not too long. However, there are visions of machines communicating with each other since the early 1800s. Machines have been providing direct communications from the time of the telegraph (the first landline), which was developed in the 1830s and 1840s. Described as “wireless telegraphy,” the first radio voice broadcast took place on 3rd June 1900, providing another necessary element for developing the Internet of Things. The development of computers began in the 1950s. The Internet, itself a significant component of the IoT, started out as part of DARPA (Defense Advanced Research Projects Agency) in 1962 and evolved into ARPANET in 1969. In the 1980s, commercial service providers started supporting public use of ARPANET, enabling it to develop into our modern Internet. Global Positioning Satellites (GPS) became a reality in the year 1993, with the Department of Defense providing a solid, highly functional system of 24 satellites. This was quickly replaced by privately owned, commercial satellites being placed in earth’s orbit. Satellites and landlines provide basic communications for much of the IoT. One additional and important component in developing a functional IoT was IPV6’s remarkably intelligent decision to increase address space. Steve Leibson, of the Computer History Museum, states, “The address space expansion means that we could assign an IPV6 address to each atom on the surface of this planet, and still have enough addresses left to do another 100+ piles of this planet.” Put another way, we are not going to run out of internet addresses anytime soon.

Realizing the Concept
The Internet of Things, as an idea, wasn’t officially named until 1999. One of the very first examples of an Internet of Things is from the early 1980s that was a Coca Cola machine, located at Carnegie Mellon University. Local programmers would connect through the Internet to the refrigerated appliance, and check to see if there was a drink available and if it was cold, before making the trip. By the year 2013, the Internet of Things had evolved into a system using multiple technologies, ranging from the Internet to wireless communication and from micro-electromechanical systems (MEMS) to embedded systems. The casual fields of automation (including the automation of buildings and homes), wireless detector networks, GPS, control systems, and others, all support the IoT. Simply declared, the Internet of Things include any device with an on/off switches connected to the Internet. This includes almost anything you can think of, ranging from cellphones to building maintenance to the jet engine of an aeroplane. Medical devices, such as a heart monitor implant or a biochip transponder in a farm animal, can transfer data over a network and are members the IoT. If it has an off/on the switch, then it can, theoretically, be part of the system. The IoT consists of a large network of internet-connected devices. Ring, a doorbell that links to your smartphone, provides an excellent example of a recent addition to the Internet of Things. Ring signals you when the doorbell is pressed and lets you see who it is and to speak with them.

Kevin Ashton, the Executive Director of Auto-ID Labs at MIT, was the very first to describe the Internet of Things while preparing a presentation for Procter & Gamble. During his speech in 1999, Mr Ashton stated: “Today computers and the Internet is almost completely dependent on human beings for information and inputs. Nearly all of the roughly 50 petabytes (a petabyte is 1,024 terabytes) of data available on the Internet at that time was first captured and created by typing manually, taking a digital picture, pressing a record button or scanning a barcode. The problem is, humans have limited time, attention, and precision. All of which indicates that they are not very good at capturing data about objects in the real world. If we had computers that knew everything about things, using data they collected without any help from humans, we would be able to track and count almost everything and greatly reduce waste, loss and cost. We would know when things needed repairing, replacing or recalling and whether they were fresh or behind their best.” Kevin Ashton thought Radio Frequency Identification (RFID) was a requirement for the Internet of Things. He decided that if all devices were “tagged,” computers could manage, track, and check them. To some extent, the tagging of things has been attained through technologies such as digital watermarking, barcodes, and QR codes. Inventory control is one of the more noticeable benefits of the Internet of Things.

Connecting Devices in New Ways
When thinking of the IoT, consider the idea, “any device which is capable, can be interconnected with each other.” The IoT is ready for new and creative ideas to add to the tasks previously in use. Imagine an alarm waking you at 6 AM in the morning, and then simultaneously signalling your coffee maker to turn on and start brewing coffee. Imagine your printer understanding when you are running flat on paper, and automatically ordering the same. Imagine the wristwatch you are wearing telling you “where” you have been the most productive, while at work. The IoT can be used to manage such things as transportation systems. In truth, the IoT provides an almost endless supply of opportunities to interconnect our devices and equipment. In terms of creativity, this field is wide open, with an unlimited number of ideas to “interconnect the devices.” It can be an exciting time for innovative individuals, in part, because we don’t fully understand the impact of these interconnections. At present, the Internet of Things is best viewed with an open mind, for purposes of creativity, and a defensive posture for purposes of privacy and security.

IoT: A Bright Future
As you can see from these Internet of Things examples, the future of IoT is a bright one. As new ideas appear about how fine to use IoT products, it will be interesting to see which way this technology goes. Will it be the best enterprise solutions, or will smart homes emerge in full force? It’s still too early to tell. That being said, if you aren’t content to wait around for the tech to come to you, your next best option is to create the software yourself. Like we said, IoT has not yet reached its full potential, so get involved now before it’s too late!