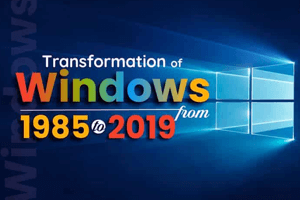 A brief history of Windows

Windows or Microsoft Windows as it is formally called is an operating system that allows users to perform complex functions on a computer. Dominating the personal computer (PC) world, Windows is estimated to be used by as much as 90% of users across the globe. Carrying a rich 36 years legacy, how did the Windows become a turning point that transformed the IT industry for a lifetime? Let’s dig deeper to find out.

The genesis of the Term ‘Windows’

Introduced in 1985, the computing boxes or “windows” that were fundamental to an operating system were named on its look and feel of a widget window. As against to typing the MS-DOS commands, windows allowed the users to point and click with the help of an input device called Mouse.

Later in 1987, Microsoft introduced Windows 2.0 that had an Intel 286 processor with improved graphics support that added few desktop icons and keyboard shortcuts. But it was Windows 3.0 that introduced Program Manager, File Manager, and Print Manager. Games like Hearts, Minesweeper, Solitaire were designed to make people used to the functions of the Mouse. It also introduced MS-DOS in Windows that began the era of multi-tasking of legacy programs with the support of 256 colors which gave a rather modern and colorful outlook to its interface.

In 1995, Microsoft was clearly a challenger to Apple’s Macintosh, However, with the launch of Windows 95 came the popular Start Button and its menu. Microsoft marketed it brilliantly with gigantic advertising campaigns. Its 32-bit environment and taskbar also focused on multitasking and fixed the bugs of windows crashing down on running many programs at once. Internet Explorer that made the internet popular and feasible was also the star feature of Windows 95. This turned out to be a point where Windows visualized the future of OS and started taking the charge as a leader of the industry.

Windows 98 was one step ahead of its predecessor that introduced Windows Media Player 6.2. But Windows Driver Model was the highlight of this version and this was supposed to support all the future versions of Windows. Its millennial edition or as it was popularly called Windows ME was considered a disappointment or a half baked idea until the Windows Vista was launched. Windows ME was the last version that was based on MS-DOS and its last in the Windows 9x line.

Windows XP, Vista and the Future

Integrating Microsoft’s enterprise and consumer line under one roof, Windows XP was arguably the best and longest-running version of Windows that was supported and updated up until 2014. Pathbreaking features such as bringing the green Start button, blue taskbar and its visual overhaul along with other visual effects made Windows to reach the peak of its popularity. However, it also gave a way for hackers to break the firewall that was turned off by default.

It was Windows Vista that rescued itself from hackers by including Windows Defender – an anti-spyware in the system and burdened the user with permission control to download third-party software. Vista also boosted the gamers industry with its Microsoft DirectX 10 technology. It also updated the overall look and feel of the Windows with more focus on transparent elements, Windows Media Player 11 and Internet Explorer 7.

Completely overhauled by redesigning the operating system, Windows 8 was launched in 2012. Its processor was so powerful that it could load up and start within just a matter of seconds as opposed to the earlier version that took minutes. It also came with a metro design system interface that was made of ‘live tiles’ when clicked on the start screen.

As a successor, Windows 10 was introduced in 2015 that gave the long-cherished Start menu in an expanded form. It features MS Edge, a new browser. Any qualified device, be it a PC, Tablet, Xbox console can update to Windows 10. The controversial feature of switching to a tablet or a PC mode is also available. With a completely updated outlook, Microsoft tried to make its users feel like a traditional desktop.

Despite being the 9th version, it is designed to unify all Windows platforms across all qualified devices including Windows phones, Tablets with a universal app store called as Windows Store to download all the latest apps in one place.