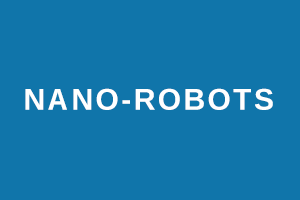 Nanobots are robots that carry out a very specific function and in terms of size, they are around ~50-100 nm wide. They are currently used in the medical field very effectively for drug delivery. As normally, drugs work through the entire body before they reach the disease-affected area. Using nanotechnology, we can make sure that the drug reaches a precise location that will make it more effective and make fewer side effects to the body.

One of the main advantages of using nanobots for drug delivery is that you can control the time of the drug release and the amount of drug release by controlling the electric pulse coming from it.

ENM’s can also be dynamic and produce the effect on-site by changing its mechanical and structural confirmation.

A fascinating aspect of ENM’s is related to the possibility to create a “nanosponge” ab0le to clean the district where it will be delivered or stick onto a given target for delivery of their cargo.

As cancer survival rates improve with early detection, nanobots are designed to have abilities to detect the early stage of cancer, and this increases the speed of the cancer diagnosis.

A simple reporting could be produced through easy and strategically positioning of the nanobots in the body which are able to log information supplied by active nanobots traveling through the bloodstream.

Nanorobots have a lot of useful applications and one of those applications is mainly for biohazard defenses, including improving the response to epidemic disease. Nanobots with protein-based biosensors are able to transmit real-time information in areas where limited public infrastructure is available and laboratory analysis and research are unavailable.