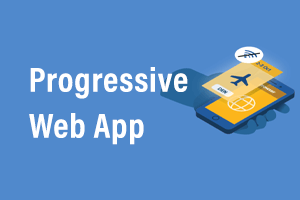 With the advent of smartphones, the number of users browsing the web on mobile devices grew significantly. Mobile applications soon surpassed websites when it came to digital media usage. Businesses started to shift their focus from websites to apps as they allow them to offer more content and better engagement with their users. Progressive Web Apps are the next big technology for the mobile web since it combines the best of websites and mobile applications.
Progressive Web Apps (PWA) are web apps developed using a number of standard patterns and specific technologies which take advantage of both web and native mobile app features. PWA is built using common web technologies like HTML, CSS, and JavaScript and is intended to open on any platform that uses a standard web browser. They provide the best experience for users by using technologies such as Service Workers, Web App Manifest, Push Notifications, and Background Sync. Progressive web apps owned by some of the popular brands including AliExpress, Flipkart Lite, Twitter, OLX, etc are reporting increased user retention rates.

Mobile users spend a huge 87% of their time on apps, compared to just 13% of their time on the mobile web. Yet, websites are a far greater reach and useful than apps. Upon seeing this, Google decided to start putting emphasis on PWAs.

PWAs provide the hybrid experience between the usability of a website and easy access of an application. PWAs can be saved to a home screen directly from the browser instead of being downloaded through an app store which often takes much time. One tap can take users to the website, which allows access to its features offline thereby providing a seamless user experience. Our mobile lives are dominated by apps while desktop lives are dominated by websites, but with the arrival of Progressive Web Apps, these two may soon become one and the same.
PWAs are not created with a single technology and rather represent a new philosophy for building web apps, involving some specific patterns, APIs, and other features. It cannot be claimed if a web app is a PWA or not from the first glance. An app could be considered a PWA when it meets certain requirements, or implements a set of given features: works offline, is installable, can send push notifications, and is easy to synchronize, etc.
Additionally, it performs well in unreliable and slow network connections making it popular among users who experience the matter of losing signals just in case of 2G networks, interrupted transactions, and unsuccessful processes but PWA gives an additional advantage of accessibility and usability even in the slowest connection.

There are some key principles a web app tries to observe to be identified as a PWA. Some of the benefits of PWAs over native apps are: