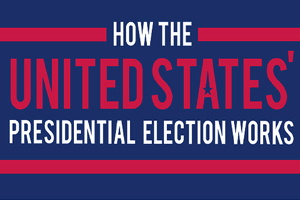 The US Presidential Election is scheduled every four years on the first Tuesday in November. Traditionally, candidates make their intention to last President public within the year before the US Presidential election takes place. Since there’s no national authority that handles the elections, local authorities regulate the election with the help of thousands of officials.

Candidate must be at least 35 years old, born in the United States and must have lived in the US for the previous 14 years so as to be eligible.

The election process starts with the two kinds of events, primaries, and caucuses in January or February of the election year. Primaries are organized by state and native authorities employing voting to cast votes for hopeful presidential candidates from each of the main parties using a secret ballot box. Whereas, Caucuses are private events organized by political parties themselves. Here, voters decide publicly which candidate they like. After this, organizers count the votes and calculate what percentage delegates each candidate receives.

Each state, the District of Columbia and a few US territories are allocated a variety of delegates, usually determined by population size. Also, a formula is employed to regulate the amount by “rewarding” states which, as an example, voted for the last party’s Presidential candidate. These delegates represent their state within the national party convention and vote to determine each party’s presidential candidate.

There are two main types of delegates:

After the successful selection of the nominee for each political party, the presidential candidates go head-to-head for election campaigns throughout the country. They go on rallies and take part in debates to win the support of voters across the nation.

On polling day, voters attend the spot and cast their vote for their preferred candidate. The voters elect their President and Vice President indirectly. Both are chosen by electors through the body process(i.e. Electoral College).

States are provided electors depending on the number of seats they have in the House of Representatives and Senate. Washington D.C. gets three electors but other US territories don’t get any. In total there are 538 electors (435 House of Representatives seats + 100 Senate seats + 3 for Washington D.C.). After ballots have been cast, all votes go to a statewide tally. States like Maine and Nebraska are the exceptions because they have a proportional system. A candidate has to “win” at least 270 electors in order to become President. Voting at the Electoral College takes place in the weeks after Election Day the winner is usually always announced on the night of the election.