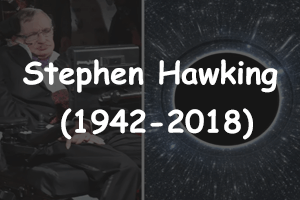 Stephen Hawking was one of the most brilliant theoretical physicists in history. He was a great scientist and a prodigious man. Stephen William Hawking was born on January 8, 1942, in Oxford, England. He received a first-class BA (Hons) degree in physics at the age of 17.

In 1962, he began his graduate studies at Trinity Hall, Cambridge where he got his Ph.D. degree in applied mathematics and theoretical physics. He is known for his work with black holes and he was also the author of the famous book “A Brief History of Time”. At the age of 21, he was diagnosed with amyotrophic lateral sclerosis. Doctors said he can live a maximum of 2 years.

As the disease spread in his body, Hawking was not able to move and started using a wheelchair. Talking grew more challenging and, in 1985, an emergency tracheotomy caused his total loss of speech. A speech-generating device created at Cambridge with a software program served as an electronic voice for Hawking.

Just before his illness, Hawking met Jane Wilde, and both were married in 1965. They had three children and after that both separated. Hawking got married again in 1995 and divorced in 2006.

Hawking continued at Cambridge after his graduation, serving as a research fellow and later as a professional fellow. In 1974, he was inducted into the Royal Society, a worldwide fellowship of scientists. In 1979, he was appointed Lucasian Professor of Mathematics at Cambridge, the most famous academic chair in the world.

During his career, Hawking studied the basic laws governing the universe.
He worked with fellow cosmologist Roger Penrose and revealed that Albert Einstein’s general theory of relativity shows that space and time began at the birth of the universe and ends within black holes, which suggests that Einstein’s theory and quantum theory must be united. Using these theories, Hawking discovered that black holes are not absolutely dark but rather produce radiation. He predicted that, following the Big Bang, black holes as small as protons were made, represented by both general relativity and quantum mechanics.
In 2014, Hawking suggested that Blackholes do not trap everything inside when forever and what goes inside them can come out in the form of radiation. “The absence of event horizons means that there are no black holes, in the sense of regimes from which light can’t escape,” Hawking wrote in a paper he posted online on January 22, 2014. The paper was based on a talk he gave in August 2013 at a workshop at the Kavli Institute for Theoretical Physics in Santa Barbara, California.
Hawking additionally proposed that the universe itself has no limit. Despite the fact that the planet is limited, one can go around it (and through the universe) endlessly, failing to encounter a divider that would be portrayed as the “end.”

Hawking was a popular writer. He wrote his first book in 1988. “A Brief History of Time” became an international bestseller. In this book, Hawking explained about the birth and death of the universe.
Hawking proceeded to compose other genuine books focused on nonresearchers. These include “A Briefer History of Time,” “The Universe in a Nutshell,” “The Grand Design” and “On the Shoulders of Giants.”
Along with his daughter Lucy Hawking, he created a fictional series of books for middle school children, on the creation of the universe.

In 2014, a film based on Hawking’s life was released. Called “The Theory of Everything,” the film drew appreciation from Hawking, who said it caused him to ponder on his own life. ” Although I’m severely disabled, I have been successful in my scientific work,” Hawking wrote on Facebook in November 2014. “I travel widely and have been to Antarctica and Easter Island, down in a submarine and up on a zero-gravity flight. One day, I hope to go into space.”

He died at the age of 76 on 14 March 2018. An interesting coincidence about Stephen Hawking is – he was born exactly 300 years after the death of Galileo and died on Einstein’s birthday.