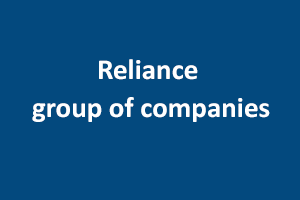 Reliance Corporation was founded by Dhirubhai Ambani in 1966 as a polyester firm. It was renamed Reliance Industries on May 08, 1973. Reliance later entered into Telecom Sector, Retail Sector, financial services, petrol refining, hydropower sector. Reliance Group is one of the foremost profitable companies in India, the most important publicly traded company in India by market capitalisation, and therefore the largest company in India. On 22 June 2020, Reliance Industries became the first Indian company to exceed US$150 billion in market capitalization after its market capitalization hit ₹11,43,667 crore on the BSE.

In 2006, Reliance entered the organised retail market in India with the launch of its mercantile establishment format under the name of ‘Reliance Fresh’. By the end of 2008, Reliance retail had on the brink of 600 stores across 57 cities in India.

These are some of the Reliance Industries logos of the different sectors.

Today’s Reliance Industries firms are distributed between the two sons of Dhirubhai Ambani:

De-merger of Reliance Industries in 2005–2006
The Ambani family holds around 45% of the shares in RIL. Since its inception, the company has been managed by its founder and chairman Dhirubhai Ambani. After suffering a stroke in 1986, he handed over the daily operations of the company to his sons Mukesh Ambani and Anil Ambani. After the death of Dhirubhai Ambani in 2002, the management of the company was taken up by both the brothers. In November 2004, Mukesh Ambani, in an interview, admitted to having differences together with his brother Anil over ‘ownership issues’. He also said that the differences “are in the private domain”. The share prices of RIL were little down by some margin when this news came out. In 2005, mother Kokilaben decided to split the control of Reliance Group into two parts. In October 2005, the split of Reliance Group was formalized. Mukesh Ambani got Reliance Industries and IPCL. Younger brother Anil Ambani received telecom, power, entertainment, and financial services business of the group. The Anil Dhirubhai Ambani Group includes Reliance Communications, Reliance Infrastructure, Reliance Capital, Reliance Natural Resources and Reliance Power.

Richest Man in India and World

Today in 2020, Mukesh Ambani, with a net worth of $36.8 billion, retained his title as the richest Indian and he is listed on Forbes as the 6th richest person in the world

Being the most extensively used JavaScript library, a jQuery Certification Exams will add enormous value to your skill-set. jQuery provides various functionalities to the developer in order to develop complex applications with ease and efficiency.